In A World Of Turmoil, Bitcoin Is A Modern Approach To Investing

Michael Trzupek, CFO of Core Scientific, offers his thoughts on how, in a world of turmoil, Bitcoin is a modern approach to investing.

The COVID-19 pandemic has ushered in a so-called Fourth Industrial Revolution, which represents an ongoing automation of traditional manufacturing and industry with modern smart technology. Over the past year, as we’ve entered this new paradigm, the way in which businesses, people, and indeed entire economies operate has profoundly changed.

As evidence of this, the past year has transformed our view of money. Bitcoin, the once “magic internet money,” is now held in the reserves of leading institutions. And, since online payment service Square purchased $50 million worth of Bitcoin in October 2020, the price has increased from $10,907 to $37,200 (the value at the time of writing). Such yields are difficult to attain elsewhere and most everyone knows it.

Having built a new monetary system from the ground up over the past ten years, the blockchain industry is well-equipped to be the next evolution in money and finance. Institutions seem to agree, as corporate treasurers—once confined to traditional investments such as bonds, treasury bills, and equities—have only begun to allocate company funds into Bitcoin.

Famous investors have, as of late, suddenly endorsed Bitcoin, too. Stanley Druckenmiller, a legendary hedge fund billionaire, has strongly recommended Bitcoin. Famed investors Bill Miller recently suggested that, the higher its price, the less risky Bitcoin becomes. He and his son happened to acquire the debt of technology company MicroStrategy, which in its treasury holds more than $1 billion worth of Bitcoin. As well, Paul Tudor Jones has equated Bitcoin to gold’s role in the 1970s as a hedge against inflation.

Institutional allocations into Bitcoin are but a sign of the digital currency’s overall adoption. In just 11 years, Bitcoin has garnered a reputation as a new safe haven asset, particularly among millennials. While older retail investors retain their proclivity toward gold, millennials prefer bitcoin, according to a brief by analysts at JPMorgan1.

Why We Are Seeing the Shift Now

That the pandemic and ensuing upheaval ignited an evolution in money comes with historical precedent. In the aftermath of the 14th century’s Black Death, profound economic change transpired. For instance, as historian Mark Bailey illustrated, the English and Italian economies were increasingly monetized during that time. We see something similar today2.

Against a backdrop colored by the Covid-19 pandemic, fiscal policy globally has led to stimulus programs with the potential to provoke severe inflation. With the stated goal of offsetting COVID-19’s economic effects, the United States and other countries have embarked upon unprecedented monetization programs. The Federal Reserve printed more money in June 2020 than the prior two centuries3. 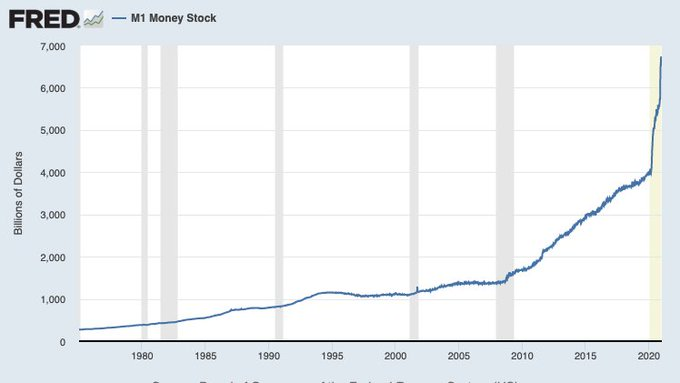 Jerome Powell, the chair of the Federal Reserve who oversaw the billowing of the nation’s money stock, has employed the “full range of tools” available to the Fed—including printing money, keeping interest rates close to zero, and purchasing assets at a clip of $120 billion per month.

Whereas the Federal Reserve embarks upon a program known as “QE Infinity,” Bitcoin offers investors the antithesis—a deflationary currency with a finite supply capped at 21 million bitcoins. And, as the US money stock balloons, so too has Bitcoin’s adoption. In 2020, Paypal first allowed users to buy and sell Bitcoin on their platform, and, through its online payments system, their merchants can now accept BTC. Visa also announced that it would soon support the first credit card offering Bitcoin rewards.

At Core Scientific, we attribute the growing investment into North American digital asset opportunities to a prevalence of Environmental, Social, and Corporate Governance (ESG) requirements and compliance. North America’s regulatory clarity attracts institutional investors, for the more regulatory clarity, the easier institutional players can allocate a portion of their portfolio into a certain asset .

As an example, the Office of the Comptroller of the Currency (OCC) presented early this year new guidance regarding U.S. banks’ ability to hold stablecoins in their reserves. Simultaneously, numerous firms are applying for federal banking charters, indicating that traditional banks will, sooner rather than later, have to accept digital assets as a part of the financial ecosystem.

While one may argue that this is all simply a fad, the bitcoin boom we are witnessing in 2021 and beyond appears to be driven by burgeoning institutional participation and a growing confidence in the asset class as a store of value for a world mired in turmoil.