Fabien Mousseau, SVP of FP&A, offers his reflections on difficulty and hashrate trends throughout the second half of 2020 and the start of 2021.

Aside from a large downward reset of -16.0% on Nov. 3, 2020—which corresponds with the end of the rainy season in China, the subsequent higher energy costs, and the corresponding unplugging of old gen miners—the Bitcoin hashrate has significantly increased on several occasions in recent months:

With a 24% cumulative increase between Nov. 3 and Jan. 25, BItcoin’s mining difficulty, which relatively measures the amount of computational resources required to mine new bitcoins, reached a new all-time high on January 25 of more than 20.6T EH/S. At the time of writing, public data shows the BTC chain’s difficulty is approximately 20.82T.

From November 3 to January 25, the BTC price jumped 131%, which incentivizes miners to continue mining bitcoins. Without such an increase in price, increased difficulty can result in smaller profits for miners.

Core Scientific analysts credit the hashrate increase to mostly new-gen miner deployment. We expect the difficulty, now at its highest rate ever of 2.08E13, to continue this trend.

Other factors contributing to the increasing hashrate may include Bitcoin’s dramatic price increase, as well as novel financing options for miners. Reports have surfaced which indicate that miners have been able to secure sub 10% interest loans for new mining equipment. One year ago the going rate was often 20%1.

In the below chart, you see that, with the exception of the above mentioned large reset on Nov. 3, and small decreases of -2.5% on Dec. 14 and -0.4% on Dec. 28–the difficulty and hashrate have both increased steadily since May 1, 2020, when the hashrate tumbled ahead of the May 11 halving: 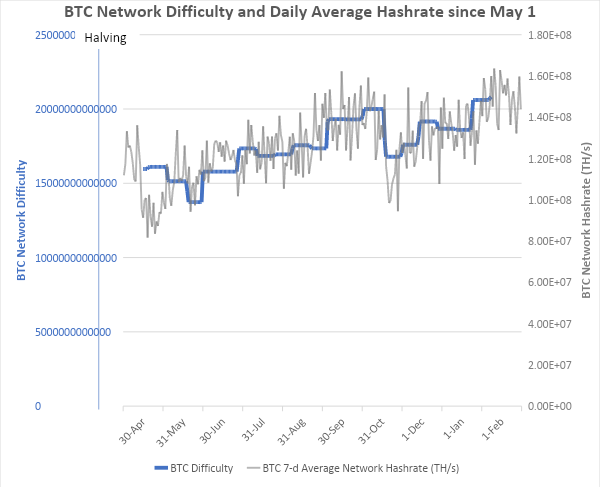 On a chart of the past  12-months, one can also observe the trend post-halving: 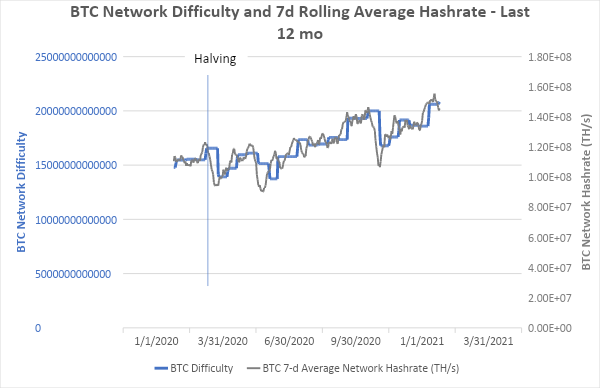 Since July 2016 halving of nearly five years ago, when the price of Bitcoin reached $650, the trend appears more dramatic. Additionally, the Nov 3 reset registers as more minuscule than on the shorter term charts. 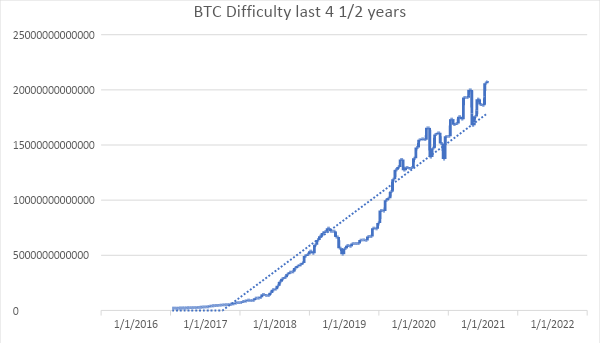 Since the May 11 halving, and the subsequent hashrate decline, the daily network hashrate trendline has trended up at 141PH per day. 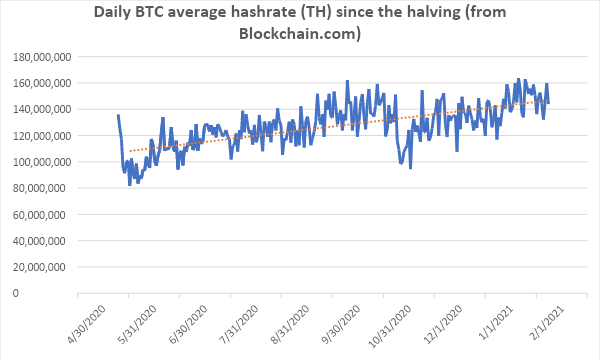 The resulting hashrate projection through the next halving, expected to take place in March 2024, demonstrates the next-generation of miners must achieve an efficiency of ~10 J/TH—that is, +/- 5 over the present ~30J/TH—so as to maintain healthy profitability. 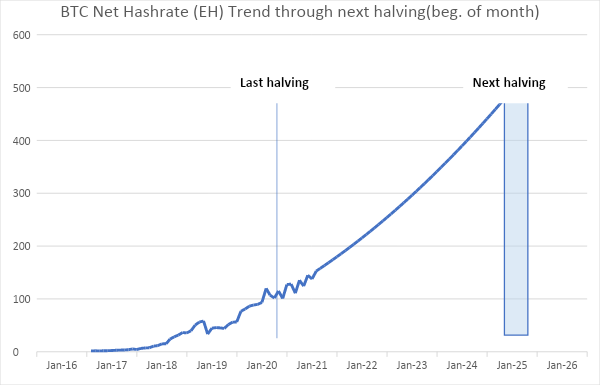 In our July 2020 Mining Difficulty and Hashrate report, we highlighted what was then an all-time high in Bitcoin’s mining difficulty of more than 17 trillion.

We opined then that the increase in hashrate was likely a result of old-generation units plugged back in at low-cost facilities and the concurrent deployment of new-generation miners. Older units, such as the T17s and S17s Antminer models, were likely coming under pressure at that time, and therefore losing profitability, rendering higher cost operations less viable. We’ve seen that process play out, and now the new models are online.

Bitcoin dominates both BCH and BSV in difficulty and hashrate. While Bitcoin runs at 155.16 EH/S, BSV sits at 1.84 and BCH .07. This is made particularly clear at Coin.Dance:

Furthermore, the graphs below indicate that, alongside mining profitability, both the BCH and BSV difficulty rates have declined post-halving 2020. This decline is driven by low BSV and BCH prices relative to BTC. As BTC difficulty increases, it remains possible that old gen units could temporarily switch to mining BCH or BSV.

The decline of BCH’s difficulty over the past 12 months is made clear in the following chart:

The following chart does the same for BSV’s difficulty: 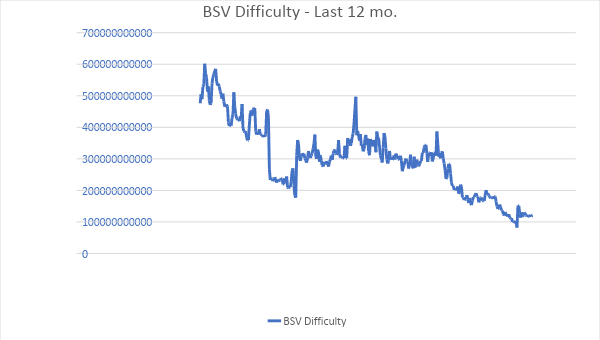 The above charts paint a different picture than our July report on BCH and BSV hashrates, in which we noted that hashrates and mining profitability of these two coins had been stable.

What Does The Hashrate Mean?

The Bitcoin hashrate remains much higher than during the slump post-halving, which, due to declining profit margins, likely caused miners to turn off their machines. Since May, the hashrate has trended upwards for about eight months. And yet, demand for mining rigs persists.

We have heard reports that nearly all major miners are scouring markets for rigs, and are even willing to pay inflated prices for second-hand machines. Moreover, demand out of North America has been strong, as wait times to receive  mining machines last months.

Reuters recently framed a global chip shortage as having stymied the production of bitcoin miners, leading to soaring prices for the specialized computer equipment. Smaller miners are being priced out, leading to a consolidation of that market. Further exacerbating the shortage, producers of the specially designed chips for mining rigs could prioritize supplies towards the production of consumer electronics, where chip demand is viewed as more stable2.

Core Scientific maintains that a sufficient number of new-gen miners have been deployed to push the BTC hashrate higher.

From an investor’s point of view, the above-outlined Bitcoin and Ethereum hashrate increases demonstrate miners still invest in and deploy new equipment, and therefore presumably have confidence in those asset’s future price appreciation. The sideways hashrates of Bitcoin SV and Bitcoin Cash, on the other hand, hint at a less sanguine sentiment.